Water Margin or Swamp Outlaws is a famous Chinese novel written in the 14th century. The story is about 108 outlaws who gathered on Liang Mountain in an attempt to create a more significant military unit. The novel is about the exploits of 108 soldiers and has just served as the inspiration for the new 108 Heroes Multiplier Fortunes casino game created by game maker Microgaming. Stories about these warriors have been retold throughout China for centuries, and even today this novel is one of the most popular in Chinese literature.

This time the warriors will be presented to you in the form of a new video slot, and the great fun is enhanced by the irresistible multipliers who are presented to the warriors. It’s time to have fun and play 108 Heroes Multiplier Fortunes, but before that, read the continuation of the text in which the review of this slot follows.

108 Heroes Multiplier Fortunes is a Chinese-themed slot with three columns arranged in three rows and nine fixed paylines. Depending on the value, individual symbols bring payments even when they appear in one copy on the columns. Winning combinations are calculated exclusively from left to right, starting from the first column on the left.

Only one win is paid on one payline, so even if you have more than one payline on one payline, you will be paid the highest value combination. The sum of winnings is certainly possible but only when they are achieved on several different payment lines at the same time.

The Credits field will show the amount of money available to you for the game. The Max Bet button will be most liked by players who like high stakes because by clicking on this button you automatically set the maximum bet per spin. The autoplay function is available and you can activate it at any time. Clicking on the Bet field will open a menu where you can change the value of your bet. Quick Spin Mode is available so if you want a slightly more dynamic game you can activate it in the settings.

We must note that the multipliers x3, x4 and x5 appear exclusively on the middle column while the multiplier x2 can appear on any column. 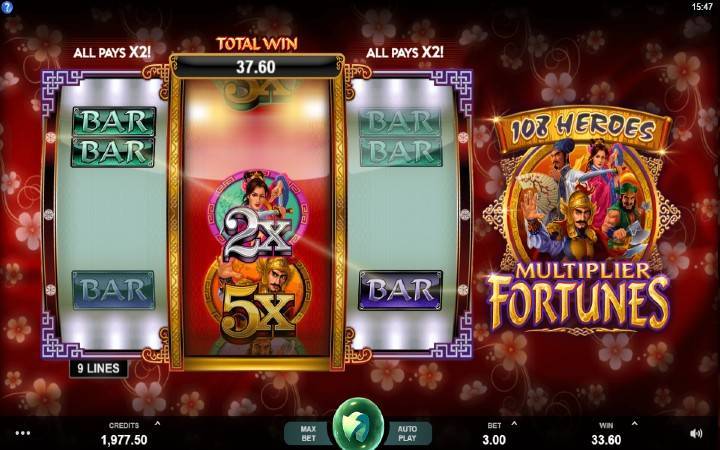 If two or more multiplier warriors appear in the middle column, the Respin Bonus is triggered. The middle column remains in place and the first and third columns will rotate again. This can lead you to great gains.

Warriors change all other symbols and increase their winnings by the value of the multiplier.

The columns of the 108 Heroes Multiplier Fortunes slot are placed on a red background on which flowers are scattered. The graphics are very good and the sound effects contribute to the atmosphere of the game itself.

108 Heroes Multiplier Fortunes – multipliers that can bring you wealth!

The Choice is Yours Megaways – a big party