Haven’t played a good classic slot in a long time? The next game that we will present to you is just like that. Not only is it good but it is also royal! Imperial Fruits 5 Lines comes to us from online casino game maker Playson.

Playson is a manufacturer that has made so many classic slots that we can say that it is his specialty. But this classic also has one royal symbol, and that is the crown. It can bring you great benefits. 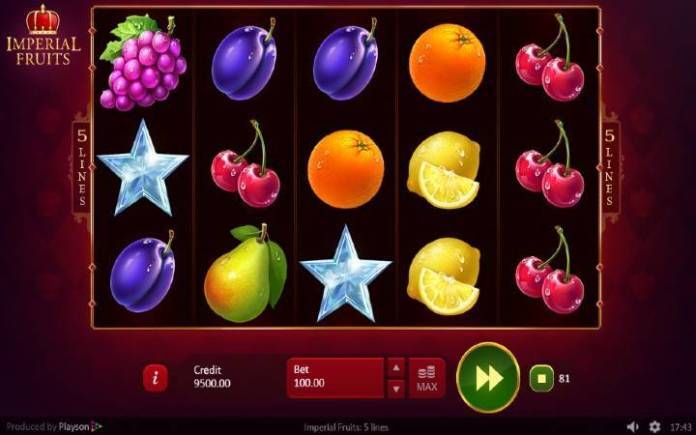 If you want to know more about this slot, read the following text, which follows an overview of the Imperial Fruits 5 Lines slot. We have divided the overview of this game into several segments:

Imperial Fruits 5 Lines is a classic slot that has five columns placed in three rows and five fixed paylines. To make any winnings you need to connect three matching symbols on the payline.

Lucky 7 is the only symbol in the game that offers payouts and with two symbols in a row. All winning combinations are calculated from left to right, starting from the first column on the left.

The sum of winnings is certainly possible, but only if they are made on different paylines.

In the Credit field you will see the remaining amount of money available to you for the game. Clicking on the coin image button will open a menu where you can select the value of your stake. You can do the same thing with the plus and minus keys on either side of the coin image keys.

The symbols of the least value are four irresistible fruits: lemon, orange, plum and cherry. Five of these symbols on the payline will bring you 20 times more than the stakes per spin.

A sweet pear brings twice the value and will bring you 40 times more than the stakes if you combine the five symbols on the payline.

Watermelon and grapes have the same payment value. If you combine five identical of these symbols on the payline, you win 100 times more than the stakes!

The symbol of the highest payout value in this game is the red Lucky 7 symbol. This symbol will bring you great payouts! Four of these symbols in the payline yield 40 times more than the stakes, while five symbols in the string yield 400 times more! You heard right, take the chance to make a great profit.

This game also has three special symbols: two scatters and one wild.

The wild symbol is in the shape of a crown and now it is clear to you why the slot is called Imperial (royal). This symbol changes all symbols, except the scatter, and helps them to form winning combinations.

When it is in the winning combination, it will expand to the entire column and thus contribute to increasing your winnings. He appears only in columns two, three and four.

The diamond scatter only appears on columns one, three and five. These three symbols on the columns bring 20 times more than the stakes.

The columns are placed on a burgundy background, which is flooded with symbols of the crown. You can only hear beeps as you spin the columns and make a profit. The graphics of the game are great.