We have all learned well from history textbooks the story of the famous merchant and navigator from Genoa, Christopher Columbus, who discovered the New World! Overnight, his men went from merchants and sailors to conquerors. He was also a pirate at one point in his life and is best remembered for leading four major voyages. He gained enormous benefits from Spain, under whose flag the roads are. The producer of the Greentube games was very inspired by the character and work of Christopher Columbus and from that, a new casino game Columbus Deluxe was created! Let us go on a trip to the New World together, experience a little adventure and fun!

Columbus Deluxe has five reels in three rows and ten paylines. You can adjust and change the number of paylines yourself. Real prizes await you if you play on all 10 paylines and if you want to play for fun or get acquainted with this casino game, you can also reduce their number.

All symbols pay exclusively from left to right starting from the first reel on the left. The Scatter symbol is the only symbol that pays outside the paylines, wherever it is on the reels. If you have more than one winning combination on one payline, you will only be paid the highest value. Card symbols only pay if you combine at least three of them on the payline, while other symbols offer payouts for two in combination.

The basic symbols of the online casino game Columbus Deluxe

We will start the story of symbols with the symbols that you will most often encounter on the reels. Of course, these are the classic card symbols 10, J, Q, K and A. These are the symbols of the lowest value. They are divided into two groups. 10 and J, for example, will offer you ten times the value of the stakes for five symbols on the payline, while the remaining three symbols will offer 15 times more stakes for five symbols on the payline.

The symbol of Columbus himself is the Wild and it changes all the symbols, except the Scatter and helps them to form winning combinations. It can also create a winning combination from his symbols. Five Wilds on the payline, it will bring 500 times more than the stakes!

This slot also has a gambling function. All you have to do to double your winnings is to guess which colours will be the next card drawn from the deck, black or red. You can gamble several times in a row. You can also gamble winnings from each spin separately within free spins. 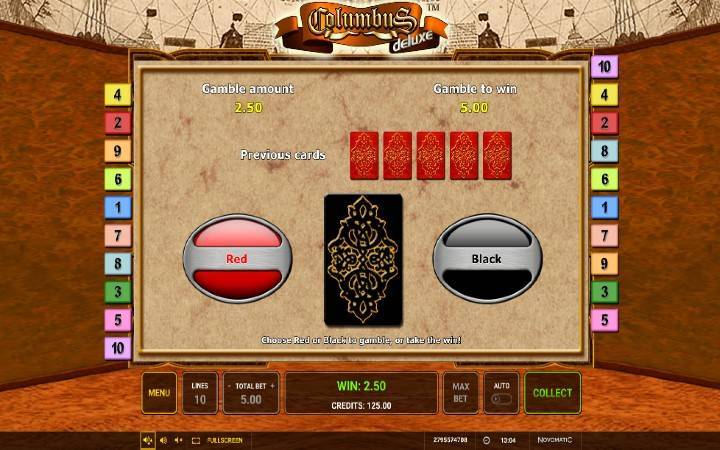 The reels are mounted on the boat itself and the soundtrack is standard. You can expect slightly stronger effects only with special functions.

Play Columbus Deluxe, join Columbus on this expedition, and he knows where to take you. In place of a lot of great winnings!

You can read a brief overview of other online casino games here.

Book of Egypt – a specialty from the book series